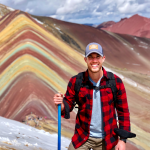 One of my favorite things in the world are airplanes. It’s fascinating that such an enormous machine can soar to great heights, accelerate at such incredible speeds, and maneuver with such precision. My love for aircraft is one of the many reasons I chose to join the Air Force.  And having the opportunity to take care of numerous pilots and learn about their air-frames is one of the real joys of my job. Fortunately, I am stationed at Eglin Air Force Base on the beautiful Emerald Coast, home to many highlights such as Destin and 30A. However, the highlight of the year takes place in Pensacola Beach, home to the U.S. Navy Blue Angels: The Greatest Air Show.

The Blue Angels originated in 1946 by Admiral Chester Nimtz, as an attempt to boost Navy morale and recruit Navy pilots. The first flight demonstration occurred on June 15, 1946, in Jacksonville, FL.  The pilots performed their first show in the Gruman F6F-5 Hellcat, which cost $35,000 and flew a then remarkable 380mph.

Now, the F/A-18 Hornet is the star of the show. The F/A-18 Hornet has served the Blue Angels since 1987, the longest tenure of any airplane assigned to the Blue Angels. The distinctive Blue Angels F/A-18 costs roughly $56,000,000 and can fly up to 1,400mph. However, max speed during the air show is approximately 700mph, almost the speed of sound. Interestingly, all of the Blue Angels’ jets can land on an aircraft carrier and can be made combat-ready in just 72 hours! I would not want to get into a dogfight with a Blue Angels pilot.

Today, about 130 people make up the Blue Angels team, with six aircraft flying in demonstrations. The Blue Angels perform approximately 35 shows a year in front of an estimated 11 million spectators. Since 1946, they have performed for nearly 500 million fans.

So you want to be a Blue Angels Pilot?

There have been 267 Blue Angels pilots through the 2019 season. Being a Blue Angels pilot is one of the most challenging yet respected professions in the military. Navy and Marine Corps pilots who meet the basic requirements for becoming a Blue Angel demonstration pilot: active-duty Navy or Marine Corps tactical jet pilot with a minimum of 1,250 flight hours can submit their application to the Applications Officer.  The applicants visit Pensacola, Florida, and interview with the squadron. Then, the new demonstration pilots and support officers are selected by a unanimous vote. The Blue Angel tour of duty is typically 2-3 years. Surprisingly, the Blue Angels do not get extra pay.

Pensacola Beach, FL, is situated on the Gulf Coast barrier island of Santa Rosa. It is home to Fort Pickens, the beach boardwalk, Opal Beach, part of the Gulf Islands National Seashore, and most importantly,  is home to the U.S. Navy Blue Angels: The Greatest Show in Pensacola Beach. The annual Red, White, and Blues Week featuring the Pensacola Beach Air Show is the highlight of the year and usually follows the week after Independence Day.  Thousands of spectators migrate to Pensacola Beach to watch The Greatest Show. Trust me; there is no better backdrop to watch the Blue Angels daring maneuvers than the beautiful Gulf of Mexico.

Breakfast with the Blues

Breakfast with the Blues kicks off the week on Wednesday. The Blue Angels arrive over Pensacola Beach around 8 AM and perform a series of maneuvers to allow an opportunity for the pilots to get familiar with the air-space and plot land references for the show. Grab a coffee and bring breakfast to the beach and enjoy a thrilling beach picnic courtesy of the Red, White, and Blue. We enjoy watching the show near the Pensacola Beach Gulf Pier as the pilots often use this as a land reference, and the pier provides an excellent vantage point to watch the thrilling maneuvers.

On Thursday, the Blue Angels perform a full practice show typically at 2 p.m. These practice shows offer the perfect opportunity to see the show without the massive crowds of spectators that show up on Friday and Saturday.

Friday, starting around noon, is the full practice air show. This includes the Blue Angels and the civilian flight demonstrations, which are full of incredibly daring and heart-stopping aerobatic acts. My heart stopped multiple times as I watched convinced that the planes were going to crash into the pier only to pull up at the last minute, nearly missing the enormous concrete pier. The show is a replica of Saturday’s air show just with slightly fewer crowds.

Saturday is the day of The Greatest Air Show in Pensacola Beach. If you are driving to the show, leave early. The Casino Beach parking lot fills up quickly. If it’s full, park wherever you can find a spot and catch the trolley before (and after) the show. We get brunch and some drinks (and soak up AC) before making our way to the show. The best vantage points are in the sand at the center point, as well as near the pier. We like the pier the best as there tend to be fewer crowds, and nothing is more thrilling than watching the pilots get dangerously close to crashing into the pier. Watching the airshow from a boat in the Gulf is on my bucket list, and yes, thousands of folks take in the show anchored in the emerald water.  Around noon, the civilian pilots will perform their thrilling show. Do not miss this portion of the show. Honestly, the civilian show is almost as exciting as the main event.

DOn’t Know What to Pack? CHeck out our Recommended Travel Gear!

The Blue Angels take flight over Pensacola Beach at 2 p.m. and usually start with a crowd favorite “Fat Albert,” a C-130 followed by a sneak pass by the Jets that always catches me off-guard. The show lasts for 45 exhilarating minutes. And believe it or not, the pilots fly as close as 18 inches from each other, from 50 feet in altitude to 15,000, with their speed varying from 120mph to 700mph. You will be amazed by the fantastic precision of these aircraft. When the Blue Angels make their final pass, folks tend to pack up in a rush to wait in traffic. Trust me, do not do this. Instead, enjoy the beach, go for a swim, hit the boardwalk, catch a band, or grab some dinner. Enjoy being in paradise, instead of traffic! 5 Destin Day Trips: If You Need a Break From The Beach